We’re Aydin from the UK and Caroline from Austria and fell in love in Krakow in 2015. Ayd was on a sabbatical and travelled Europe for three months on his own. Caroline worked at a university and was on Easter break when she spontaneously decided to hop on a train to Poland. Having underestimated the grim Polish “spring” weather, she checked into a dorm at Mundo Hostel with a bad cold after visiting Warsaw and instantly fell asleep, only to be woken up by a knock on the door a few hours later. After exclaiming three times that the door was indeed open, she angrily got off her bed and teared open the door, only to find Aydin’s puppy eyes staring at her. The rest is history, even though she refused to go out drinking with him that evening. 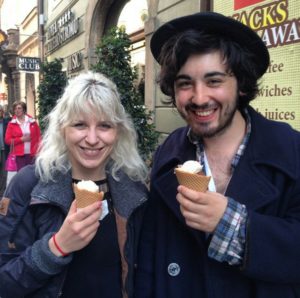 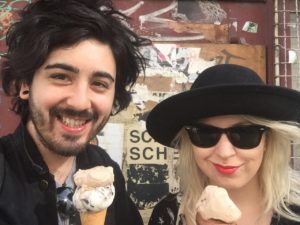 We started travelling together, from Czech Republic to Vienna and Bratislava, to Croatia and Bulgaria, meeting some of our closest friends on the way. When we parted ways in Bulgaria, we weren’t willing to let it end that way, so after a long-distance relationship for a year, Aydin moved into Caroline’s flat in Vienna. Ever since then, we have continued to explore the world and save up to be able to see more of it, and now we’re finally on our way!

Aydin studied Forensic computing at de Montfort University in Leicester and is now a freelance senior PHP & Magento software developer. If you want to hire him head over to his website https://www.aydinhassan.co.uk and get in touch with him to have a chat about your proposals. You can also head over to Upwork and hire him directly there.

He is proficient in a number of frameworks and technologies including Magento, Laravel, Symfony & ZF. Most of his experience is based around high profile eCommerce websites.

Caroline holds a BA in linguistics, a first-class MA in African Studies and is currently completing her MA in Theoretical Linguistics. While working at the University of Vienna as a teaching and research assistant for several years she obtained her CELTA and has been a freelance teacher since 2016.

She is fluent in English and German, has extensive teaching and proofreading experience and is familiar with academic and remote working environments. Hire her for anything language-related!

Fleeting light on a little island in lake Obersee